Five stars! Acanthus have carried out designs for three rooms in our home and have always done a quality job. Each of the rooms had their own design difficulties which were all overcome by clever design and expert craftsmanship. Will be top of the list when we come to do the next one!

We are absolutely over the moon with our new Kitchen & bedrooms. The whole experience was stress free & from our initial design consultation to the furniture being fitted everyone involved has been extremely helpful, we cannot praise the work of the installation team who went above and beyond to ensure everything was perfectly finished beyond our expectations. The bedrooms are beautiful and the Kitchen is simply stunning, we cannot wait to get our study from you next year! Please thank everyone involved for their hard efforts.

We are Delighted with the Quooker system. With regard to the installation of the Franke sink & Quooker, both tradesmen were highly professional and most friendly as was you attention to our enquires.

So happy with our hand crafted Aga, made in Britain it has classic good looks around which our Acanthus Kitchen was designed. Cooking is a much more relaxed process and food tastes better. No need for a toaster, bread maker or slow cooker & the gentle warmth greets us as we enter our kitchen, which has become the focal point of our home.

I have used Acanthus in my own home and on the property developments I have been involved with, on each and every occasion I have been impressed, not only with the high level of design & product quality on offer from Acanthus, but also the great recommendation by Acanthus of the Siemens appliances, they were not the most expensive option, but looked fantastic and have gone on to provide excellent performance, full marks.

We had our first and second kitchen designed by Acanthus Design of Crosby some years ago, our Acanthus designer recommended Parapan on the grounds of its long lasting quality, but also its ability to maintain its colour even in the bright sunlight of our apartment, good call, never had a problem, easy to maintain, and still looks as good as new years later, quite a bit more expensive than Vinyl finishes, but you get what you pay for. 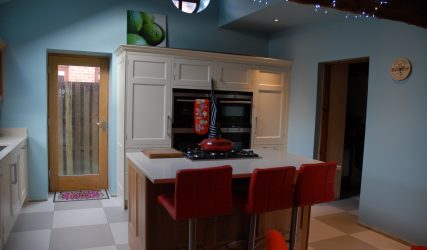 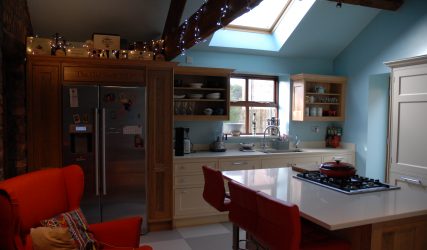 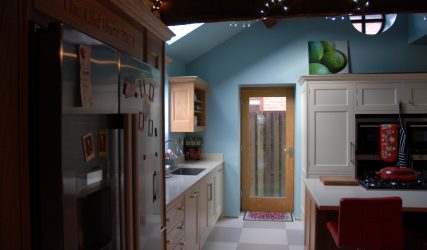 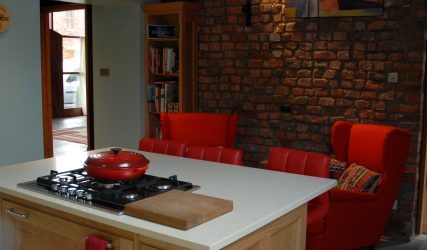 We have had the benefit of having Gaggenau appliances in two of the kitchens Acanthus designed for us, in our first kitchen from Acanthus my wife Liz, who is a fabulous cook, thoroughly enjoyed the experience of the larger ovens, steamer & hobs, all built with quality and the cook in mind, in our current home Acanthus again designed the kitchen and Gaggenau was again chosen after our first experience, this time we extended our selection to the fridge freezers as well, they look great and perform so well, as expected!

We were in two minds about including a Quooker tap when our designer from Acanthus suggested it in our kitchen, we considered it a luxury item……but, actually it’s a life changer! We save on space, energy and so much time .Our advice is: if you can’t decide then you have to include one, you won’t regret it.

When discussing my kitchen with Acanthus, my designer suggested the use of Corian to enable the large shaped island top to maintain the sleek sweeping lines of the kitchen without joints, it worked a treat, we are so pleased with the finished kitchen which gives us great pleasure every day, and in particular our Corian work surfaces.