View our Past & Present Press Releases Through The Looking Glass:

We have great relationships with many interior designers throughout the northwest. This was another project that Southport based designer Lisa Allen had asked us to be a part of.

The project involved several area’s within the clients prestigious home that required furniture. This bedroom case study focuses on just one of the several bedroom’s acanthus Designed & Installed Furniture.

This Painted Bedroom was designed for the clients daughter who was in her early twenty’s and required something that was contemporary, Timeless & in keeping with her age. It was important to work closely with Lisa to ensure we kept within the scheme to produce fantastic furniture that complemented Lisa’s choice of colours & materials within the room.

The next step was to offer the client something that was bespoke to them. Would bring the room to life & be in keeping with the scheme set out by interior designer Lisa Allen.

Starting with the addition of our Acanthus Cornice & Mirrored Tray Doors which are unique to ourselves. Working with the scheme of the room we selected Farrow & ball’s No.57 Off Black for painting of the furniture. This was in keeping with the timeless contemporary look required. To balance the black and prevent the mirrors from looking stark against the black we incorporated an antique effect mirror which added depth and warmth to the furniture. In addition to the wardrobe doors the Dressing table also features antique mirror. Using our specialist glass manufacturer we were able to produce all of the mirrors with bevelled edges. Even the smallest of mirrors which most companies would be unable to produce was hand crafted by our specialist Glass-maker.

No job is without its problems. Acanthus take great pride in finding a solution to resolve any possible issues both in the design & during the installation process. Above all ensuring our clients are always happy.

Although this bedroom was able to accommodate large furniture there was an issue raised by the dressing of the window. The client wished to have curtains fitted to the windows that would encroach on the space required for her furniture. So our design had to work around this. We created a small return on the furniture that would house both the curtain rail and the curtain.

This can be seen Pictured below. All things considered this was a relativity small issue but ultimately a good example of our attention to detail. As a result it is the Attention to detail that ensures the best outcome is achieved every time.

You can read & see more of this Off Black Bedroom by clicking the following link. 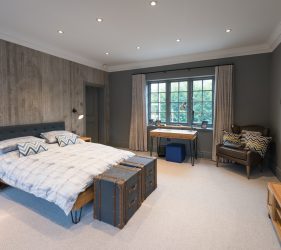 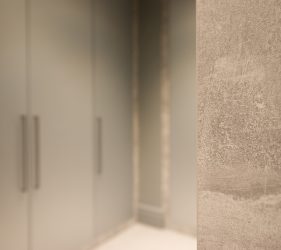 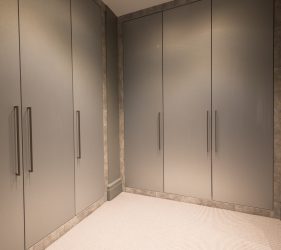 Make Sure to Click For More Options On The Tour To Go Full Screen Or Display Through Your VR Helmet!